On October 25, 1922, 100 years ago today, Francis Xavier Pirazzini was born in The Bronx. Frank was an ordained UCC pastor who mostly served large churches. He was also a Conference Minister during his career and was rumored to have been a finalist for UCC General Minister and President. In 1976, he headed the National UCC’s fundraising campaign in honor of the U.S. Bicentennial. The goal was to raise $17 million for the six historically Black colleges that were affiliated with the UCC, and they surpassed the goal.

Frank was kind of a big deal in our denomination, but to me, he was Grandpa Frank. He was the grandparent that I was closest to, and in a tragic twist of fate, he’s the grandparent I lost first. 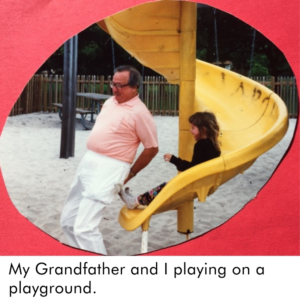 While his body gave out in 2007, we really started losing him in 2000 when we got his diagnosis of Alzheimer’s Disease. I was just 13 when he was diagnosed, so I didn’t have much time with him. He never knew I went to seminary or followed in his footsteps and became a UCC pastor, but I like to think that he’d be proud of me. Of all my grandparents, he had the most formative impact on me, as evidenced by Soren’s middle name, Francis.

I wish you could have known him. He was a loud, portly Italian with beautiful olive skin, and he wore a gold signet ring. He had a warm, infectious laugh and a kind smile, he was, quite simply, a joy to be around.

But Frank also lived his life in service to others, specifically those who had less than him, less money, less power, less influence, less of a voice. In 1969 he was part of the Counter Inaugural Parade during Nixon’s Inauguration. They carried caskets down the street parallel to the official inaugural parade, representing those who were killed in the Vietnam War. My grandfather was a pallbearer in the parade, resulting in our family’s phone being tapped by the FBI. In the 1960s, he worked alongside the Rev. Dr. King and joined many peace and civil rights demonstrations. Frank advocated for the ordination of LGBT people and the use of inclusive language for God in the 1970s. He used his voice and his power to advocate for justice; that was how he understood his calling to follow Christ.

Frank lived his life in service to others because he loved people. He was gracious and disarming, and gave the best hugs. He liked to smoke cigars on the beach, Sanibel was one of his favorites. But he wasn’t perfect, sometimes his sense of humor was a little off-color. Sometimes he spoke before he thought and said things that were insensitive. Sometimes he was rough around the edges and didn’t always display a perfectly “pastoral” presence. But when he misspoke, he apologized. He had a sincerity about him, what you saw was what you got. Even people who disagreed with him couldn’t help but like him.

When I first thought about becoming a pastor myself, I worried that I might not be nice enough, tolerant enough, or patient enough. But then I remembered that someone like him, with those same flaws, could not only be a pastor, but change the world. I figured that I could at least give it a shot.

Don’t wait until you’ve smoothed out all your rough edges before you try to make a difference, otherwise you never will. God can work with what you have to offer. Remember not to take yourself too seriously, because nobody ever complained about laughing too much in a church meeting.